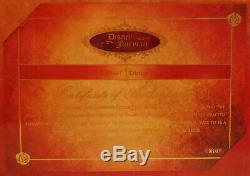 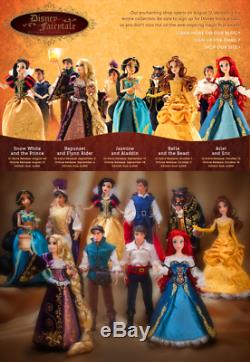 BN LE6000 Disney Designer Fairytale Collection BELLE & THE BEAST Dolls BEAUTY Here we have a set of the ABSOLUTELY STUNNING Disney's Designer Fairytale Collection Dolls. The dolls (2 in total) are BRAND NEW in their original box - the top cover of the box has only been removed once to photograph the Certificates of Authenticity for this listing. All dolls are LIMITED EDITION and were released by Disney back in 2013 - this listing is for Belle & The Beast from Beauty & The Beast. Certificate of Authenticity and Display Stand included, as well as. You will receive 1 set of dolls plus 1 gift bag! These dolls were the most anticipated release of the year back in 2013, and were the original dolls to start the now legendary Disney Fairytale Designer Collection. The original series listed here revitalised Disney's Princesses.

Gerald Mendez and Jessica Fuchs were on hand at the D23 Convention to introduce the line with the Designer series originator Steve Thompson credited as doing the sketchwork. The Princesses and Princes wear clothes much like the ones they wear on screen, but with some newer embellishments. There is embroidery work on each gown and some of the Princesses show some changes like Ariel's exposed shoulders and Snow White's long hair. The Disney Fairytale Designer Collection was carefully crafted by artists inspired by Disney's true heritage of the fairytale, beginning with the 1937 classic, Snow White and the Seven Dwarfs.

Celebrating the magical moment in the fairytale when the couples fall in love, five Disney Princesses and their beaus have been reimagined in exquisite detail with these limited edition dolls. Brought to life with thoughtful attention, they uniquely capture the essence of the fairytale couple, creating a one of a kind set that will be a treasured keepsake of collectors, Disney fans, and every princess at heart! The Disney Fairytale Designer Limited Edition Doll Sets include Snow White and the Prince; Rapunzel and Flynn Rider; Jasmine and Aladdin; Belle and the Beast; and Ariel and Eric, all brought to life with careful attention. Featuring stunning details, such as satin gowns with subtle ornate prints, embroidered bodices, golden buttons and rhinestone accents, each set is presented in a special keepsake display case with intricate details on the base, including a golden plate with the name of the specific Disney Princess and her partner.

Part of the Disney Fairytale Designer Collection, our Limited Edition Collector doll set was designed by Disney Store Artists and carefully crafted to capture the beauty and romance of the classic film's fairytale couple. Sure to be a treasured keepsake for years to come, these heirloom doll sets are limited to 6000 produced worldwide.

The Little Mermaid Designer Doll Set - available in Stores October 15th and online October 16th. Belle and the Beast - Through a selfless act of courage, the beautiful and strong-willed Belle is confined to the castle of a terrible Beast. Always the epitome of grace, Belle is enchanting in her golden silk gown and brings hope for a cursed Prince who did not have love in his heart. And in a tale as old as time, Belle and Beast each learn acceptance, understanding and the meaning of true love. Romantic curls swept back, revealing golden gemstone earrings. Off-shoulder embroidered bodice and opera-length gloves. Satin gown with subtle ornate print, embroidered gemstones, luxe shirring and gathering, plus lace underskirt. Handsome velvety coat with golden embroidery, piped trim and golden buttons. Included in this listing are the following Limited Edition Numbered Dolls: Belle and the Beast - 5168 of 6000 Dolls will be sent via Courier. Collection welcome from Sevenoaks in Kent.

The item "BN LE6000 Disney Designer Fairytale Collection BELLE & THE BEAST Dolls BEAUTY" is in sale since Monday, September 7, 2020. This item is in the category "Collectables\Disneyana\Contemporary (1968-Now)\Figurines/Figures/Groups". The seller is "cherie_the_little_mermaid" and is located in Sevenoaks. This item can be shipped to United Kingdom.