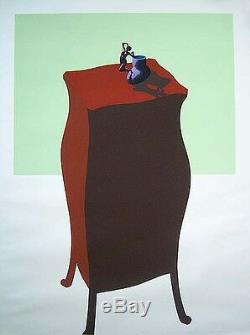 The figurine cup of each print was colored in light purple and pink pencil by the artist. It measures 30" x 40" and is framed in a Plexiglas box frame (the frame is damaged on the lower right corner).

It is in excellent condition aside from a slight stain on the lower right sheet edge. It bears the embossed blindstamp of the printer and publisher, Gemini G. On the front lower right. Kenneth Price was an American ceramic artist and printmaker who was born in Los Angeles, California in 1935.

Kenneth Price studied ceramics with Peter Voulkos and was awarded a Tamarind Fellowship. He is best known for his abstract shapes constructed from fired clay. Typically, they are not glazed, but intricately painted with multiple layers of bright acrylic paint and then sanded down to reveal the colors beneath. Price's first solo show came at the Ferus Gallery in 1960 where he quickly became part of a developing art movement that included artists such as Larry Bell, Billy Al Bengston, John Altoon, John Mason, and Ed Ruscha, among many others. Price would have three solo shows during the short time Ferus was open, and by the mid-sixties Price was fixture in the west coast art scene. Aside from six months Price spent in Japan in 1962, Price would remain in Los Angeles until 1970, when he and his wife, Happy, relocated to Taos, New Mexico. In 1992, he was given his first retrospective, at the Walker Art Center in Minneapolis, Minnesota. His artwork is currently featured in a career-spanning retrospective.

The seller is "skf-fineart" and is located in Los Angeles, California. This item can be shipped worldwide.