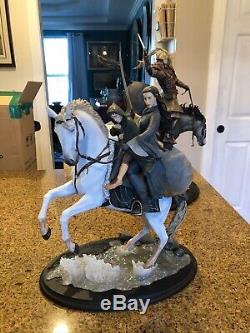 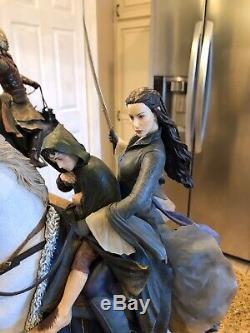 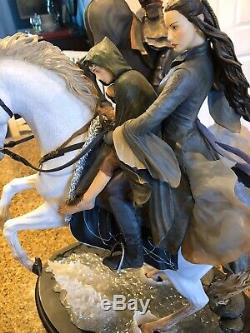 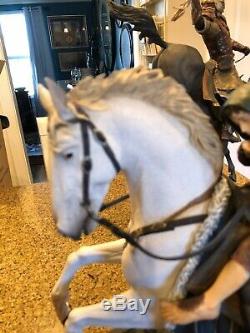 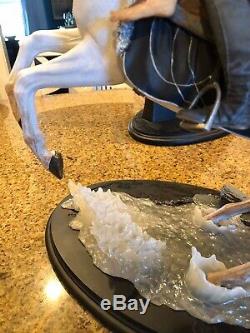 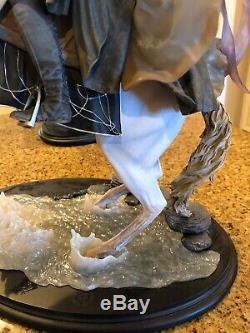 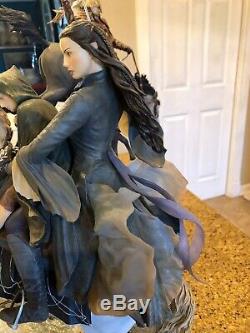 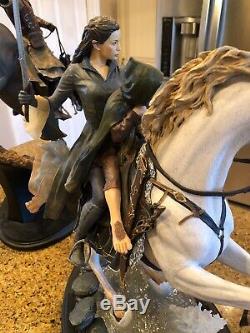 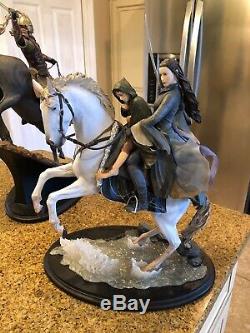 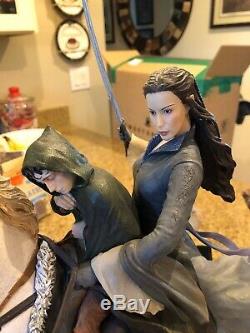 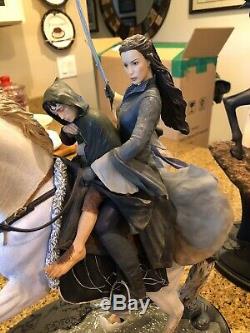 Dimensions:13.58" x 18.89" x 9.25 (W x H x D) 34.5 cm x 48 cm x 23.5 cmWeight:16.53 lbs (7.5 kg). Winner of seventeen Academy Awards, The Lord of the Rings was brought to the big screen by New Line Cinema and directed by Peter Jackson. Weta Workshop was intrinsically involved in the design and physical effects manufacture for all three films. When Aragorn and his hobbit charges were hunted through the wilds of Eriador by Saurons Ringwraiths, the Elf princess Arwen seized sword and saddle, and rode from Rivendell to meet him.

In the Trollshaw Forest Arwen found her love, but the Wraiths were close. Hobbit Frodo Baggins had been stabbed by a Morgul blade, and even now its shard worked its way ever closer to his heart. On foot they had no chance, but holding Frodo to her, Arwen spurred her valiant mount Asfaloth into the sprint of his life. With the Nine Nazgûl at their heels, Arwen and Frodo rode alone for the Ford of Bruinen, where she hoped the enchanted waters of her fathers home might protect them from their pursuers. Unveiled for the first time at San Diego Comic-Con in 2018, Weta Workshop presents Arwen and Frodo on Asfaloth: our dynamic polystone that perfectly captures this dangerous and daring rescue. In an unforgettable showdown, Arwen sets her will and turns to face her shadowy pursuers.

Though outnumbered and in deadly peril, Arwen fearlessly stands her ground before the Nine terrifying Ringwraiths. Sculpting collectibles is not a game of golf, it is a marathon. Turning up day after day the sculptor can meddle away at the same square centimetre all day and come in the next day only to do it all again.

Weta Workshop: Celebrating 20 Years of Creativity. Sculpted by hand, this collectible defies expectation for what can be captured in polystone. The robes of our heroine billow out as she wields Hadhafang, etched with Elven runes, against the Nine. The first time Weta Workshop has crafted water in such a way: near clear, water-effect resin appears to splash up from the River Bruinen itself. Sculpted by the masterful Jane Wenley, Arwen and Frodo on Asfaloth joins Weta Workshops high-quality 1:6 scale Middle-earth line; a line that is made by the very same artists and technicians who work on our movies. It takes 400-500 hours to design, sculpt, model make, mold, and paint the prototype for each new Middle-earth piece. Whether it be a prop replica, beautiful environment or iconic character, we treat our collectibles with the same level of care and attention to detail that we bring to our film work. The item "Lord of the Rings Arwen and Frodo on Asfaloth Limited Edition of 750 Weta Statue" is in sale since Friday, May 1, 2020. This item is in the category "Toys & Hobbies\Action Figures\TV, Movie & Video Games".