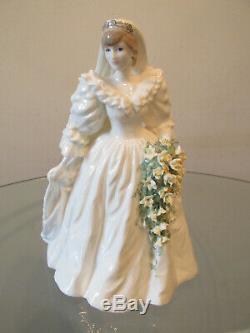 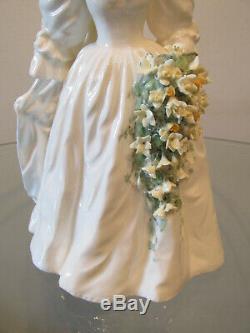 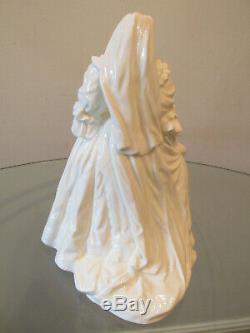 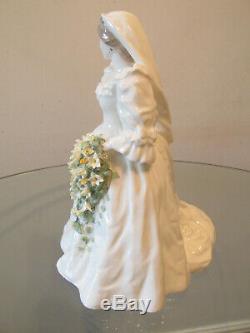 Gorgeous, Stunning Coalport production of the " Diana Princess of Wales" Bridal Gown Figurine - Made in England - in UK Limited Edition of 12,500, of which this is no. Coalport porcelain production began in Coalbrookdale, Shropshire, England, in 1795, founded by John Rose. In 1820, Rose received the Society of Arts Gold Medal for his feldspar production, and in 1830 introduced the practice of applying a light transfer printed outline, to guide the painters. In 1926, production moved to Staffordshire, the'Home of The Potteries'. In 1967, the company became part of the Wedgwood Group, although retaining the Coalport brand. The skill and artistry that is apparent in every detail of "Diana", bears eloquent testimony to the legendary quality of Coalport. Sculpted by the renowned John Bromley, well known to lovers of Coalport figures, this rare and precious bone china figure was produced to celebrate the marriage of Prince Charles and Lady Diana Spencer, on 29th July 1981, at St Paul's Cathedral in London. The marriage was widely billed as a "fairytale wedding".

A National Holiday was declared to mark the event. Really Beautiful in her fabulous wedding dress, of ivory silk taffeta, decorated with lace and sequins, designed by Elizabeth and David Emanuel. Diana is depicted holding her bouquet of gardenias, orchids and roses with a traditional sprig of Myrtle.

She wore her family's heirloom tiara, over an ivory silk tulle veil. The figurine, which measures 9.25/23.5cms tall, is in excellent condition, with no chips, cracks or crazing.

Backstamp reads Bone China / COALPORT / Made in England / EST 1750 / DIANA / Princess of Wales / 29th July 1981 /. / Issued in a hand - numbered UK limited Edition of 12,500 only, of which this is No. / (c) Compton & Woodhouse CW 438. The item "Coalport Diana Princess of Wales Figurine John Bromley Limited Edition" is in sale since Monday, March 16, 2020. This item is in the category "Pottery, Porcelain & Glass\Porcelain/China\Coalport\Decorative/Ornamental".